or,
The Blind Leading The Blind*

*except there’s alcohol involved, which kinda makes it worse

As I mentioned, Jack came to visit on Monday, and I pressed him into service, painting parts of the basement, and starting a batch of beer with me.  Jack was such a fine guest, and such an able hand around the house, that I wonder if I might not slip some of my other friends the king’s shilling, and trick ‘em into coming out here to help me work on the house.

Honestly, though, by the time that happens, I’ll probably have finished excavating the basement and turning it into my workshop.  I never really imagined having a workshop before moving out to the house, but now I’m enthralled with the idea.

ANYWAY beer.  The home-brewer makes beer not in an enormous steel tun, but rather in the smaller, handsome glass vessel known as a carboy.  Jack’s father, Jim, lent me his long-unused brewing kit, in exchange for a six-pack of whatever I make (I think this is a fine arrangement).  Here is that carboy, a five-gallon model:

Five gallons is pretty standard for home-brewing, because, for chrissake, how much more would you want?  5 gallons is 640 ounces, is 53 12-ounce bottles of beer, and if I didn’t have eager friends to descend upon the damned things like locusts, I’m not even sure I could drink 53 bottles of anything in a summer.  Could I?  Not beer.  I like beer, but not enough to drink one a day for two months.  That’s just not the sort of drinker I am; I might have two beers in a week, but even that is rare.

Then again, I’ve never really had much beer in the house before, so I may yet drink my words.

That’s sort of irrelevant at present, though – I’m sure I’ll meet enough people out here, especially in the local brewing crowd, who won’t pass up free home- brew.  I make that statement assuming everything comes out all right with this batch.

Let’s go through how brewing works.

You start by boiling water in an enormous stockpot – three gallons.  Two more gallons of water go into the carboy.  Everything in brewing has to be sanitized to death, but I simply put tap water into the stockpot.  I drink it anyway, and hell – I boil the stuff for an hour, which certainly qualifies as sanitized.

The recipe I used, which I bought as a kit from Libertyville’s Perfect Brewing Supply, is a clone of Bell’s Oberon, which is a citrusy wheat beer – a delightful summer ale.

Beer is nothing more than a sort of barley-malt tea that you throw some hungry yeast at – the yeast convert the maltose and whatever other sugars you give them into alcohol and CO2.  The hops provide complex flavors and bittering agents.

In the case of this beer, which Perfect Brewing has cunningly given the appelation “Ober Easy” (oh ho ho), it begins by making a wheat tea.  The beer kit came with this bag of grain:

This grain is decanted into a sort of loose … I hesitate to call it a sock, really, but it was a cotton containment unit of some kind. 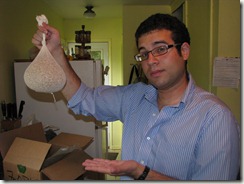 This, Jack and I put into the kettle, which had reached 150°F, and we steeped it in the water for about half an hour.

After that half-hour, we removed the bag, leaving the wort (for that is what it is, now, a pre-fermented beer.  You pronounce it /wərt/, or wurt for the uninitiated.) this pleasant color: 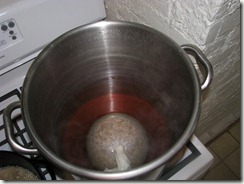 The bag of wheat went in a little bowl to cool, before I threw it out.  It continued to let off some liquid, which Jack and I sampled (I did it first, because I’m the one that has those kind of ideas).  It was… actually, quite pleasant – a sweet, earthy taste. It’s not hard to see how someone might have gotten the idea to ferment a strong wheat tea, some twelve thousand years ago: “Man, this tastes pretty good, but I think it’d be even better if it got us drunk.”

To this wort we added the bag of barley-malt sugar, which is pretty much what makes most beers beer.  Beer can be made from pretty much any cereal, sure – I mean, what is sake if not rice beer, but beer as we conceive of it in the european form – even wheat beer! – contains barley malt, or sugar made from barley malt.  Most of the time, at least.

Malt extract comes in either a plastic sack, or a can.  It’s about the consistency of molasses or honey, so it helps to warm it in a sinkful of hot water before you start to, ah, express it from its container.  It’s a tetchy process. 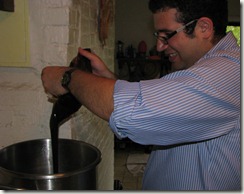 Then we started to boil the wort, whereupon it was time to add the hops, which, to my surprise, did not come as little dried buds, but as these curious, green pellets.

Then I took my immense plastic spoon, and commenced the stirring. 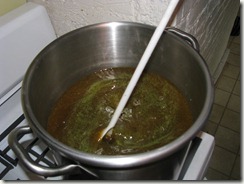 Once we’d added all the hops, I set the lid on to let the thing boil – this was a dumb idea, because all the hops seemingly leapt to the lid and stuck there; I scraped them off with a spatula, and we left the kettle uncovered for the remainder of the boil.

After boiling the crap out of the wort and letting it cool, Jack and I added the yeast, and set up the fermenting rig in the basement.  I attached a siphon tube to the neck of the carboy, and ran it into a runoff flask – that foamy liquid coming out of the carboy is called kräusen, and right now it smells kind of like mango (it’s the hops).  In a few weeks, I’ll bottle it, and in a week or so after that, I’ll taste it!

I’ll let you know how it goes! 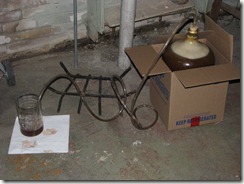