Preparing for the End Times the Tastiest Way I Know!

Probably you are tired of this by now, but I’m not:

A gorgeous and long-awaited fall has graced Chicago, and consequently I am girding up for winter’s terrible onset.  Actually, I’m excited.  Carolyn is terrified, and already misses summer.  I scoff at her, and put on my favorite KWUR hoodie.

The change in seasons has me collecting food like  a chipmunk.  I recently purchased a chest freezer off Craigslist – a big one, but not the biggest one.  It’s, uh, noticeable. 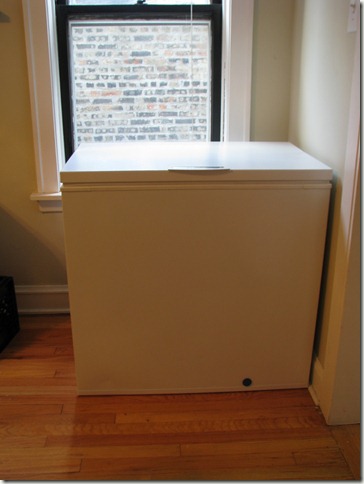 See, I kept on running out of room in my freezer.  I’d cook in quantity, and then run out of space for ice cubes.  I made a large quantity of leek and potato soup, and froze 3/4ths of it, and with the chickens I’d recently de-boned, the stock cubes I made from those bones, and the bottle of homemade limoncello that my friend Aaron gave me a year ago, there wasn’t room for much of anything else in my freezer.  And, having just eaten a quart or so of the stuff, I was in no hurry to defrost and finish the soup.

Now I have space enough to store a hundred meals (and, to anticipate a few wags, yes, a coupla corpses.  Don’t cross me.).  Finally, with room to store anything I could ever want to make, I’ve finally found my calling – COOKING IN OBSCENELY MASSIVE QUANITY.  My new friend Terri works at the Chicago Food Depository as a cook, and if I asked her, she’d probably say that my exuberance for that very thing might wane the moment I had to stick my gloved hands into “a massive bucket of mayonnaise.”  Despite my hearty Defense of Mayonnaise, I think she’s right.  And I shall have to avoid buckets of the stuff.

Anyway, having storage space like this means that I can save money by buying in bulk and not having to worry about spoilage.  It also means spending a lot of money up-front for long-term savings.  That pork shoulder is $1.99 per pound, but it only comes as a full 20-pound shoulder?  Well, okay!  Lemme just throw down 40 bucks and we can do business!

It was this kind of thinking that led me to the realization that I could (and should!) make approximately 18 pounds of my mother’s spaghetti sauce.  I mean, after all, what else are giant stockpots and chest freezers for? 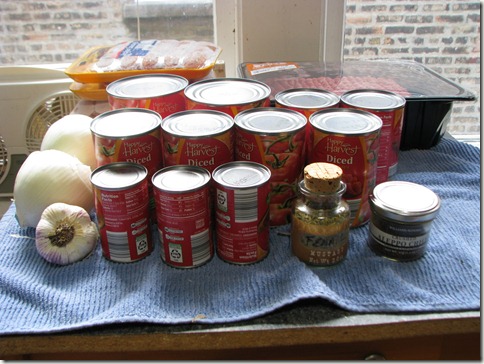 This is the spaghetti sauce I grew up with; it’s not a bolognese or anything – it’s just a chunky tomato, beef, and Italian sausage sauce with a whole load of fennel.  I’ve modified it slightly to fit my more fennel! more red pepper! tastes.

I understand that probably you don’t have an enormous freezer, or even a stockpot the size of your torso, which is why I present this recipe in normal proportion, with wildly incongruous photographs.

Mostly My Mother’s Spaghetti Sauce
Makes enough for two pounds of spaghetti.  Freezes like a champion.

If you like, I’ve made up the (roughly scalar – I recognize that 24 ounces is not 3/4th of 28 ounces, but it makes sense as you scale up the recipe that the tomato outpaces the meat) part-to-whole ratios, although I’ve got to admit that they get a little ridiculous as we get to the spices, because they’re by weight, not volume.

The Setup
You will need:

1.  Dice the onion or onions and set aside.  Then peel and chop the garlic fine.  My friend Aaron was the first person to show this to me, so he gets the credit – there’s this video from Saveur magazine floating around lately that details a technique for quickly peeling an entire head of garlic.  Since I was using an entire head of garlic, I decided to try it – it certainly worked, but I think it’d be silly to do for fewer than eight cloves of garlic.  Don’t bother unless you wanna cover the insides of two bowls with garlic peels. 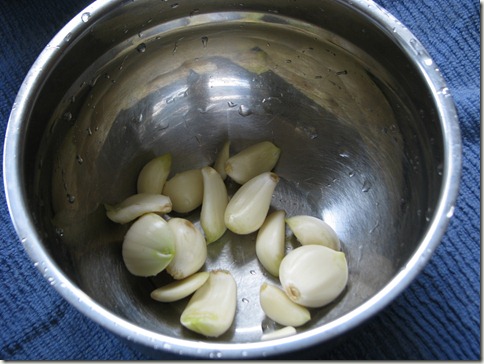 2.  Start browning the beef in a big, 6-quart pot (and, y’know, if you’re making it with 10 pounds of meat, use a great big multigallon stockpot).  Drain the fat (optionally, into a measuring cup) and set the meat aside.  I used a wire-mesh spider to get everything out of the pot. 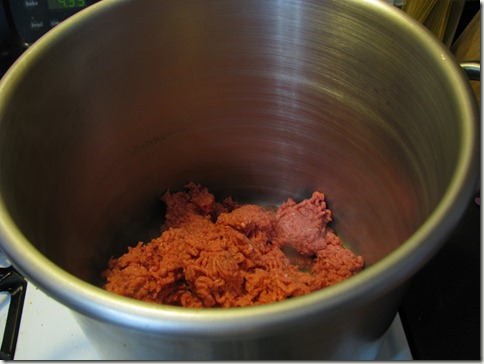 4.  Deal with the sausage.  I actually liked that the sausage was still semi-frozen, because it made it easier to cut and portion evenly. 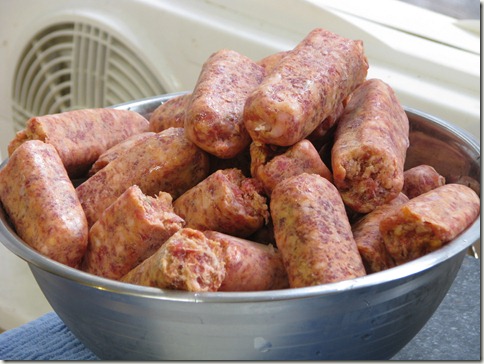 Still.  That’s a lot of sausage.  I mean, we’re looking at a mountain of meat, here.  Cut or squish the sausage into 1/4-inch chunks and cook it in the same pot as the one you browned the meat in; remove the sausage from the pot once it’s evenly cooked through, and set it aside with the beef..  At this point, switch out your slotted spoon or wire spider for a Trusty Wooden Spoon.

5.  Dump the onion and garlic into the rendered sausage fat, add the fennel seeds, and cook over medium heat until your kitchen smells like heaven.  The onion will get yellow and soft, the garlic will melt like it’s sinking into a comfortable bath, and you will then…

6. Give your sous chef, co-chef, guy- or gal pal a high five because it’s step six.  And Step Six always has a high five in it.  Secret handshakes, too, are admissible.

7.  Pour in the red wine and stir it into the aromatics – let the wine vapor fill your kitchen, and breathe deep: if it makes you feel special, you may pretend that a Calabrian has just burst.  (No, they aren’t from Star Trek.)

8.  Measure out your canned tomatoes and dump them in on top of the aromatics, the wine, and the fennel.  Wash the cans out with water (or more wine) and add their contents to the pot.  Stir to combine. 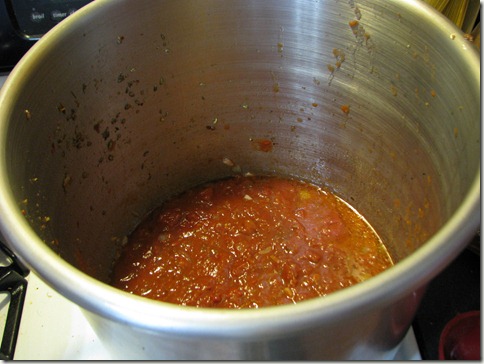 9.  Add in the cooked beef and sausage, as well as the red and black pepper, stir with your Trusty Wooden Spoon, and bring the mixture to a gentle bubble – reduce the heat and simmer for half an hour to forty-five minutes.

10A.  For service:  Fill your pasta pot with water (I’m assuming you’ve got a 6 to 8 quart pot) and a tablespoon of salt, cook the pasta of your choosing al dente (I like how this goes with spaghetti, even if it’s senseless and nontraditional to have a thin pasta with a chunky sauce.  However, nothing about this is traditional, or even Italian.  If you’re not into the long, thin pastas, the sauce goes nicely with penne rigate or rigatoni.  Crucially, reserve a cup of the pasta water before draining the pasta.

Drain the pasta, put it back in the pot (over low heat), spoon over the sauce (a little at a time.  By god, not all of it – you’ll probably end up tupperwaring 3/4ths of this anyhow), and splash some of the pasta water over everything.  The starchy pasta water will thicken up the sauce, and lend a really full-bodied mouthfeel to the already quite-substantial sauce.  Cheese is, at this point, almost superfluous.  But feel free to be superfluous.

10B.  For packing up and freezing:  As soon as it’s cool enough to pack up, portion the sauce into pint and quart-sized containers (leaving at least a half-inch of headroom to allow for the sauce to expand as it freezes).  Cover and let stand until they’re cool enough to put in the refrigerator.  Let them hang out in the refrigerator overnight (or for a few hours) – you don’t want to melt the stuff in your freezer.  Then label them, pop them in the freezer, and let them freeze into lovely hard pucks of sauce.

Then stack them to show how much there is.  Because you’re smart.  And stacking them is definitely a clever and intelligent thing to do. 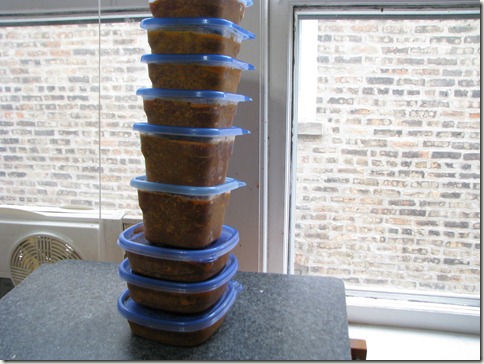 The sauce should keep for up to 9 months, and then get slowly less good as the months wear on, but let’s be real, here – unless you make an actual literal metric ton of the stuff, you’re probably going to eat it all inside of six months anyway.