There’s a resale shop in Chicago – actually, there are a few of them – whose proceeds benefit the Howard Brown Health Center in Chicago, the premier GLBT health services provider in the Chicago area.  It’s called The Brown Elephant.  I go there whenever I can, because A) It benefits a good cause, B) there are treasures in their used books section, and C) their kitchen goods section is expansive, awesome, and cheap.

I recently bought a teapot that matches my cup-and-saucer set, and since then I have been making tea like a lunatic.  Sure, I made tea before, but in that way that I never particularly liked; I’d fill a teabag with loose tea, plop it in a coffee mug, and pour hot water over it to steep.  It’s the single-serve coffee-shop way of selling tea in the U.S., the way I used to dish out tea when I worked in a coffeeshop as a teenager.  I don’t like the way the teabag flops out of the mug and hits you in the nose; it’s like being slapped by a tiny sea lion.  It seems evident to me that the best way to drink tea is in little cups, out of a teapot.  You can control the sweetener on a per-portion basis, you can make rather a lot at once, and you feel a little bit more like a grown-up, rather than an on-the-go-nup drinking lukewarm, second refill tea out of your sustainable but silly to-go sippy cup.

So, I’ve been drinking a lot of Kenilworth Estate Ceylon tea.  It’s the business, brother.  It’s damned fine, and I can get a pound of it for 16 bucks at the Coffee and Tea Exchange near Carolyn’s apartment (put that in your pipe and smoke it, Teavana, you 8-bucks-an-ounce tea thieves!).  I love this city.

Carolyn’s wanted a Chai Spice mix recipe for a while now, so here we go!  Chai is just Hindi for tea (Hindi and Russian and Persian and Aramaic and Mandarin and Japanese – cha/chai is an incredibly common pronunciation.  Medieval trade was global too, people.), and what we generally think of as the chai stuff in a chai latte is the chai spice-mix, the chai masala, and that’s what I’ll be describing today.

A spice-mix like this has applications beyond tea!  We’ll investigate them after I give you the recipe.

Chances are, if you don’t have ground cardamom, you’ll have purchased the green seed pods.  These things are obnoxious, and until I figured out this option, I used to crack the pods open with my fingernails, and laboriously loosen each of the pod’s small black seeds free from the papery-white pith.  Predictably, the seeds would spring out like cannonballs, shooting across the kitchen, into my shirt, behind the refrigerator, onto the stovetop.  This would not do.

So, what I do now is take my cardamom pods, place them in a bag, and roll them over with a rolling pin or wooden dowel until they’re completely broken up.  Then I put them through the loosest wire-mesh strainer I have to catch the husks, and then I chuckle to myself for my cleverness.

Of course, you could always just buy pre-sorted cardamom seeds, which will keep their flavor longer than ground cardamom but save you the bother as well.  I think you’ll have to buy them online or in specialty shops, as whole cardamom is hard enough to find in this country in the first place.

1.  Sort out and measure all your spices.

2.  Using a spice grinder, a mortar and pestle, or a draft horse-driven mill, grind all the spices into a fine powder.

3.  Bottle and label.  Store in a cool, dark cupboard.

Making a pot of Masala Chai

1.  For every cup of tea you intend to make, use one teaspoon of tea.  For every teaspoon of tea that you add, add 1/3 teaspoon of chai spice mix.  (Thus, a teaspoon of spice mix for every tablespoon of tea.)  And when you’re done calculating that, always add another teaspoon for the pot.  And use a black, unflavored tea, something with a strong taste and a good body – Darjeeling is traditional, but Ceylon or Assam will do fine.  Earl Grey is a no, because of that bergamot oil.

2. Fill your teabag with the chai spice and tea, place it in the teapot, and pour boiling water into the pot.  Cover and steep for five to six minutes.

3.  Pour into cups, add milk and sweetener to taste (I don’t think it’s masala chai unless it’s a milk tea), and enjoy. 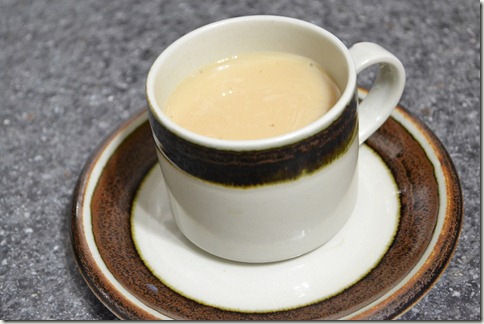 Making other things with your chai spice mix

Melissa Clark, the food writer I seem to reference the most often in these entries, has an all-purpose shortbread recipe, which Carolyn swears by.  After I made this spice mix, she made the Rosemary Shortbread, subbing out the rosemary for a teaspoon of masala.  I’ll reprint it here, but buy Melissa’s latest book, Cook This Now!  It’s a recipe book organized seasonally; unsure of what to make?  Befuddled by the variety of recipes available?  Flip open Cook This Now to January.  There.  She’s just made it easier for you.

1. Heat oven to 325 degrees. In a food processor, pulse together flour, sugar, chai spice and salt. Add butter, and honey if desired, and pulse to fine crumbs. Pulse a few more times until some crumbs start to come together, but don’t overprocess. Dough should not be smooth.

2. Press dough into an ungreased 8- or 9-inch-square baking pan or 9-inch pie pan. Prick dough all over with a fork. Bake until golden brown, 35 to 40 minutes for 9-inch pan, 45 to 50 minutes for 8-inch. Transfer to a wire rack to cool. Cut into squares, bars or wedges while still warm.

You could also make Heather’s Blackberry Flan with chai spice instead of (or in addition to the vanilla) – take out the blackberries.  And my sister Julie likes these Chai Cupcakes, but I think you could get away with using a tablespoon of chai spice (or 2 and a half teaspoons of chai spice and a half-teaspoon of nutmeg), and make your own chai-spiced milk tea for the cupcake batter instead of using bagged chai.

But really, the applications are pretty widespread.

Ah, friends.  Where would I be without friends?  And tea?

Oh.  Oh, that was a rhetorical question.  You didn’t need to hear the end of that thought, did you?