I am but a stranger.

I’m not even going to try to convince you that pie is better than cake. I’ll just tell you that no pie-eating nation can ever be permanently vanquished, and that “in our own glad and fortunate country the seasons are known by their respective dominant pies.” We set our clocks by pie. Pie is, to be truthful, the pinnacle of human achievement, and anyone who tells you that it’s vaccines, rockets, and wireless internet is blowing it out his ass.

Well, if I’m reading my watch correctly, pumpkin pie season is here, and will be for another month or two. If, in that time, you choose to roast your own pumpkins (which I recommend, heartily! It’s fun!), you will probably end up with an excess of pumpkin puree, and, by extension, pie filling. Now, I wouldn’t stoop to call this a bad thing, but probably by the time you have leftover pie filling, you’re probably sick of making crusts – sure, you could nip out to the store and get a coupla pre-made graham-cracker crusts (that’s what I did, after all, because there ain’t no pie like spontaneous pie), but let’s imagine that it’s the day after thanksgiving, or, okay, two days after thanksgiving, and you’re exhausted from pie-crafting. But you desire more pumpkin – I feel that. I can identify with that. This recipe is for you.

Remember, a pumpkin pie filling is mostly just puree, milk, and eggs. It’s a custard! And what can you do with custards? You can dole them out into ramekins and bake them as crustless custard cups! Easy.

I do this in a water bath (or bain-marie) because the water regulates the temperature fairly well, and, though it’ll take a little longer than it would if I’d just arranged the ramekins on a cookie sheet, they’ll bake more evenly because of it.  Since these custards are in individual servings, they don’t need to set as firmly as they might for pie, but it’s really up to you.  The toothpick test will tell you whether or not the custard is at your desired consistency. I cannot.

For the last several years, my go-to pie has been the late, marvelous Camille Glenn’s brandied pumpkin pie from her glorious Heritage of Southern Cooking by Workman books. I like it because there’s liquor in it. But also because I roast a pumpkin for it.

Roasting a pumpkin is no different from roasting any other kind of squash – you could do it two ways:

Way #1: Quarter the pumpkin, and, in a large roasting pan with an inch of water in it, roast the pieces at 350 degrees F, cut-side down, until they are soft – about an hour (The Acorn Squash method).

Way #2: Peel and cube the pumpkin, and roast on a lightly oiled baking sheet at 450 degrees until soft, maybe 20 to 25 minutes (the Butternut Squash Method).

I like Way #2 better, and it doesn’t really matter how you do it, because whatever you do, that pumpkin is going to be removed from its shell and scooped into a large food processor. Puree it into submission. Unless you’ve got an enormous food processor (or a relatively small pumpkin), you probably won’t be able to fit it all in there, and that’s totally okay. You can freeze your excess pumpkin and use it later.

Camille Glenn’s recipe calls for brandy, and brandy’s a fun flavor to have in pie, but you know what I like better? Whiskey. And Southern Comfort. A shot of each will do for flavoring this baby.

You will also need:

1.  Mix puree with eggs and milk – beat with a whisk or a spatula until well-incorporated and maybe a little frothy.

2.  Combine sugar and spices, stir well to combine, and then mix with the custard mixture until fully incorporated and dissolved.  Set aside!

4. Measure a half cup of pie filling into each ramekin and place it in the baking dish – then, when you’ve filled all your ramekins, pour water into the baking dish so that it comes up to about half-an-inch to an inch around the ramekins.

5. Put them in the oven until they’re set, 35 to 45 minutes.  Remove from the oven, and when the water’s cool enough to touch, remove the ramekins from the water bath.

While you’re doing that, you can get to work on the topping!

Now, originally, I thought, “Hey!  What if I put some marshmallows on top?  That’d be kind of neat.”  I had some marshmallows in the pantry – a little old, sure, but unopened and perfectly serviceable.  I figured, hell – this’ll work out fine!

However, what I neglected to realize was that melted marshmallows look… really unappetizing. 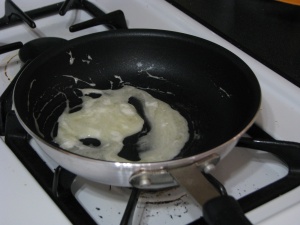 Like someone sneezed in the pan. Or something. I don’t know. Draw your own conclusions. 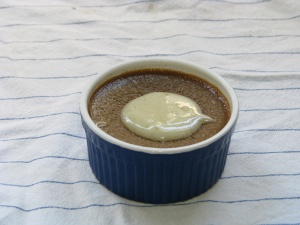 But then I decided, “You know what this pumpkin pie could use? That’s right! More pumpkin.”

So into my pantry I went for some green, hulled pumpkin seeds – they’re called pepitas.

For pies or otherwise
Ingredients:

1. In a small nonstick skillet over medium-low heat, toast the pepitas and toss to coat with chili powder; cook for about 2 to 4 minutes.

2. Kill heat, toss with 1/4-teaspoon of salt, or to taste.
3. Sprinkle over pumpkin pie! Or mix with raisins and cashews and call it Autumn-Flavored Trail Mix.

One thought on “Take Me to the Pie-lette”