So, with the onset of the colder months, like I’ve been saying, I think it’s time to hunker down.  The winds of winter are going to slice through the cracks between the wall and the windows, shred through your clothes, and freeze your blood, so you might as well fill yourself with food that keeps you warm.  To that end, I’ve decided to begin a new series on macaroni and cheese.

Actually, I think this was Editor Girlfriend’s idea.  Carolyn’s really good at saying, “Hey!  You should write about Thing X,” and providing an excellent rationale for it.  It’s not like she tricks me into thinking that something was my idea in the first place (that’s not her style), but she can just be very quietly persuasive.  Anyway, one of my most popular recipes on the blog is my Thai Red Curry Macaroni and Cheese.  I didn’t advertise it or anything; people just find it through Google searches.  And I want to provide recipes that people are looking for.  So I’m doin’ this series.  Let’s get to it!

There are three schools of mac and cheese in this country:

Type I: Blue-box Kraft Macaroni and Cheese.  You cook the pasta, you drain the pasta, you add milk and a powder mix.  This stuff is well-loved for its comfort value, but I didn’t grow up on it, so I find it rather grainy, gummy, and glossy in that plasticky way, for my tastes.  Besides, making it barely counts as cooking.  But it is in a class of its own, and I’m sure it’s by far the most popular school of mac and cheese in the United States.  From 2008 to 2010, sales of packaged macaroni and cheese rose by 25%.

Type II: Macaroni Casserole.  You undercook the pasta, drain and rinse it, and toss it in a cheesy, eggy custard, and pour it in a casserole pan, dust the top with bread crumbs, and bake it until it firms up.  This is the sort of macaroni and cheese you’re the most likely to be served in a restaurant, because it’s really easy to do the prep on it, portion it out, and “bake it off” in individual servings.  It’s also easy to do in a cafeteria setting, because you can do exactly the same thing with an enormous aluminum tray of the stuff as you could with a single ramekin.  It’ll keep in the fridge, unchanged, for hours or even days until it needs to be baked.

Type III: Stovetop Macaroni.  I like to imagine that this was the version that Thomas Jefferson commissioned in 1802, although it is most assuredly not.  It was, however, in the early 19th century that Antonin Carême developed his classifications of the Four Mother Sauces, which Éscoffier would later revise and expand into five sauces.  Stovetop macaroni is dressed with a Mornay sauce, which is a cheesy version of the milk-and-roux-based Béchamel mother sauce.  This is the version we’re gonna be working with.

This is going to become a series on macaroni and cheese, and so a number of recipes are going to be referring back to this page quite often.  After a lot of testing, I have determined that this is, to be certain, my master recipe for Stovetop Mac and Cheese.  I may, at some point in this series, try and come up with a good Type II recipe, or even a Type I knockoff (although I don’t think I have the materials and wherewithal to make cheese powder.  I could be wrong! I haven’t even begun to research that.).  But I’m going to stick with Type III for now.

I’m not going to wax political for particularly long here, but I think the global recession has affected our stomachs.  It may just be how it looks from where I’m standing, but El Bullí is closed now.  It’s not 2007 anymore, and although sous-vide cookery is probably here to stay, and it’s still a nine-month wait to eat at The French Laundry, I think the era of conspicuously consumptive food is over.  At least until the next boom cycle.  America is aching – hurt, unemployed, uninsured, unhappy.  Now is the time for meatloaf, macaroni, cupcakes.  We just want a little comfort, something to take solace in while, bruised and brooding, we sit, blanket-huddled, with our friends and loved ones.  Something to allay the gnawing feeling that nothing’s going right for you.

Well.  I’m looking out for you, America.  Mac and Cheese is food for a period for austerity, but it sure as hell won’t feel like it.  Not the way I make it.  Make this recipe, close your eyes, take a bite, and allow yourself to feel, for a moment, that things are going to be okay.  Then lift your head high, get out there, and kick some ass.

Essential Stovetop Mac and Cheese
Serves 2 as a main course, 4 as a side dish

1. First, do your mise-en-place.  Dice the celery and the onion very small – 1/8th-inch dice, if you’re up for it.  Hell, if you can, brunoise them.  Why not, right?  And mince the garlic, too.  Measure everything out now, because sauce-making can be kind of tetchy work, and you want to have your full attention on making sure nothing burns, so what’s the harm?  Measure your flour, your milk, and your cheeses. 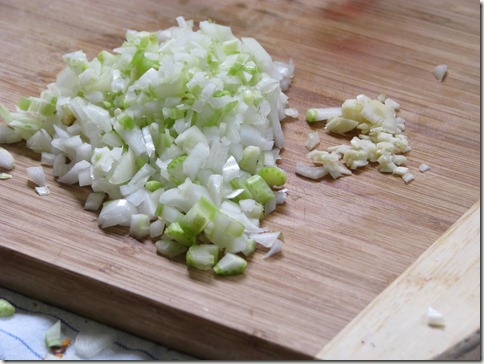 2.  Start heating the pasta water, too.

3.  Melt the butter in your saucepan and cook the aromatics (the celery, the garlic, and the onion), stirring occasionally, over medium heat, until the onion is translucent and smells cooked – approximately 5 to 7 minutes. 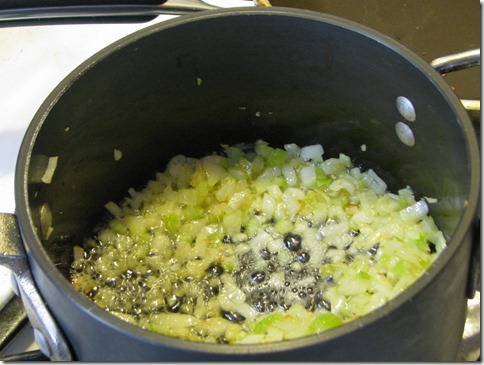 4.  Add in the flour, and stir briskly until everything begins to come together in a chunky paste, about two minutes’ worth of stirring.

5.  Add the milk, and stir briskly (but not overexuberantly!) for about a minute or so, until all the lumps of roux-paste are gone.  Continue to stir and cook for another 5 to 8 minutes, until the mixture thickens to the point where it coats the back of your spoon or spatula. 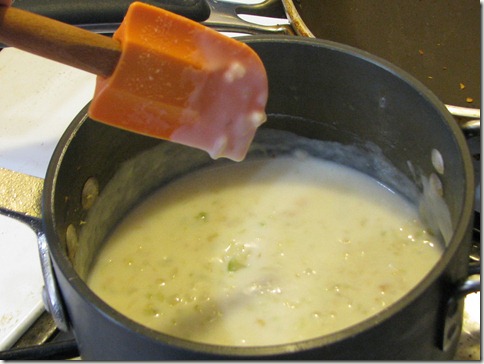 6.  Give the nearest person a high-five.

7.  You may wish to season the mixture further, here.  I’ve added a teaspoon of homemade chili powder.  For funsies.

8.  Once thickened, kill the heat and mix in the cheddar cheese and parmesan (or salt, if you don’t have –  or want to use – parmesan).  Stir until it’s all incorporated and melted. 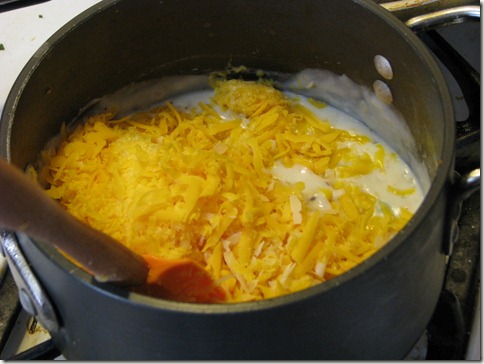 9.  Cook and drain your pasta, and then plop it all in! You’re done.

10.  Eat with pride.  You’re going to come through this just fine.  There’s macaroni and cheese and you’ve made it.  We’re all going to make it.