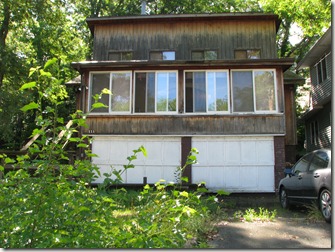 I woke up uncommonly early this morning.  5 AM.  Sun was scarcely up.  Thinking now, I’m not sure if it even was.  I left Highland Park at 6:02 AM, and reached Michigan City at 7:44.  The Skyway was completely empty.  I felt like a road god – it was fantastic.

Now, it’s been about two years since I last posted on this blog, but let me tell you: things are about to change around here.  I’m going to try blogging – if not every day, then at least three times a week.

What’s been happening in my life since July of 2008?  Funny you should ask.

Well.  What am I doing right now?  My jobs don’t necessitate me to work from any particular location, and I am lucky enough to have secured new digs for the next six months.  My family has this summer house, in Indiana, and after a long, long campaign of wheedling and debating, they have allowed me to live there for the summer, until November.

I will have no year-round neighbors.  I live in a part of town that is populated mostly by summer cottagers from Chicago (like my family, usually).  There are people on my street, of course, whom I have known since childhood (my uncle lives next door), but they will only be here on the weekends.  The week is mine, ladies and gentlemen.  The week is mine to be alone and work and write and create.

I’ve got a list of projects as long as my arm: my friends in the writers’ workshop helped me craft it at the end of the school year.

I’ll be blogging about them all as we move along, here.  Here’s a preview of four or five of the things I intend to do:

There’s nothing wrong with the kitchen.  It works, except for the oven; the stove you have to light with a lighter sometimes but it is otherwise perfectly functional.  I only dislike the green cabinets; nobody likes the green cabinets.  They’re steel, they’re ancient, and on the inside, they’re GROSS.

But.  It’s nothing a little love won’t cure.  Love, and Rust-Oleum.  I went to the hardware store and bought some white for the insides of the cabinets, and some pretty cobalt blue for the outsides.  You can see from this photo that the walls are a pleasant, recently-painted pastel yellow:

And I think a nice, vibrant blue would go quite well with it.  I have no intention of repainting the kitchen walls.

But I do intend to post here as often as I can throughout the summer, with more advice and ideas about living frugally, cooking happily, and frequent updates on the state of the house, which, incidentally, needs a name.  My parents are calling me the Writer in Residence.  I want to call this place The Hermitage, but I’m open to ideas.

This is going to be a fantastic summer.